0056 WWC Fear and Bad Habits – Give Yourself a Break

In this episode the relationship between fear and bad habits and the importance of going easy on yourself are covered. 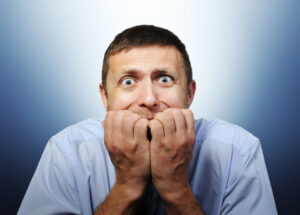 You may notice that when trying to break a bad habit resolution fades and suddenly you’re back to the bad habit maybe even more so than before the resolution. There’s a good reason for that in this podcast is going to cover that issue.

We will look at the chain of events that goes into the creation of a bad habit with a special focus on how bad habits interlock and are mutually reinforcing, making it difficult to shift to healthier, more constructive behaviors.

Bad habits originate in one of five fears which, specifically, are:

– fear of vulnerability and being consumed

– fear of not being good enough and getting destroyed

– fear of being nothing

With the fear of instability the belief that everything in one’s world is going to fall apart. This leads to rigid behaviors which in turn leads to a sense of being trapped by the very things one’s trying to save.

With the fear of vulnerability and being consume leads to trying to get along with everyone which, when taken to extreme leads to just freezing in place.

With the fear of not being good enough rather than simply standing up for oneself the urge sets in to give endless explanations, create white papers, and slide into workaholic behavior rather than simply standing up for oneself due to fear of getting destroyed if a stance is taken. With this fear one is ultimately torn apart by trying to do more and more busywork.

With the fear of being nothing a blankness can set in which leads to a fragmentation of one’s worldview and not being able to see the overall picture. In other words, a sense of cluelessness is present. Ultimately, with this fear a sense of dissolving into nothingness develops.

So these fears the result from reacting to situations lead to the creation of projective emotions, more commonly called projections. These comprise:

With rage there is the urge to tear people and situations apart, to destroy.

With greed there is the urge to consume everything, never getting satisfied, and only wanting more after something has been gained.

With instinct a reptilian type of behavior sets in it is a moral and simply focuses on having urges satisfied.

Desire is a little more subtle and can be reflected in concerns about societal position, e.g., wanting to live in the right neighborhood, have the right job, have the children go to the right schools, worrying about one’s image, seeing one’s children as simply as an extension of themselves, etc.

Jealousy is a projection of feelings of inadequacy. The individual is always wanting what others have and can harbor a deep resentment when the issue is actually all about not taking care of oneself in a healthy way.

Pride comprises the projection of a sense of superiority over all others, treating them like objects to be manipulated on a chessboard. A tremendous insensitivity is present which, when combined with greed, becomes hugely destructive.

So far, everything that is been described from the initial fears to the reactive emotions is inwardly focused. This negative energy, though, ends up being thrown into the outside world through the creation of negative, or karmic, behaviors. Karma, is commonly misunderstood as “what goes around comes around.” This is not necessarily true. Many evil people die without experiencing the repercussions of their behaviors. The better way to view karma is as a negative behavior put out into the world the takes on a life of its own in an unpredictable manner. Karma comprises four elements:

Actualization is the conscious thought around the performance of a negative act.

Execution is putting that thought into action.

Objectification is choosing another person or oneself is the target of the negative behavior.

Completion is about being successful in creating the desired destruction.

Now, when we execute these karmic behaviors if we do it often enough it starts becoming a pattern (more commonly called a habit). The pattern comprises four elements:

Mechanization is the conversion of the act from a conscious one to a “spinal” one where the activity is performed in a reflexive manner. Think about figure skater focuses on where her hand is and how her fingers are during the figure skating routine they practice the behavior over and over and over again until it becomes, well, spinal. This means they no longer have to think about it, which frees their brain to move on to other considerations.

Resource consumption is about channeling energy into the negative behavior. Over time this becomes very nasty because the resource consumption increases both in terms of the amount of energy consumed and the speed of onset. This is one of the elements that makes breaking that habits difficult.

Crystallization is when the negative effects of karmic behavior is compounded. By this I mean one bad habit interlocks with another bad habit at the spinal level. These bad habits become self protective so that when you try to break one the other bad habits will kick in to cause you to behave in a self sabotaging manner in order to preserve the bad habits. For example, you may be successful in losing a few pounds and suddenly, before you know it, your reading multiple pieces of cake.

Finally, this crystallization becomes even more intense through habituation. In other words, the karmic behaviors are the ones with which one leads with when going out into the world. And, because these behaviors are habituated and “spinal” there can be no sense of actually engaging in unhealthy behaviors. The individual doing karmic activities can feel just fine about themselves and have a sense of confusion when confronted by friends, relatives, coworkers, strangers.

From reading all this you can hopefully see the changing bad habits and replacing them with healthy ones is not necessarily a straightforward process. It requires a coordinated effort across all areas of life in order to effect the change in a lasting manner. In future podcasts I will talk about how to bring about those changes.