In today’s podcast we have a wide-ranging discussion about Women in Agile and Agility itself with Carina Silfverduk, an Agile Practice Lead at CAS. The basis being creating abundance in business through compassion, empathy, and discipline. Carina leads the local chapter of Women in Agile, working at the 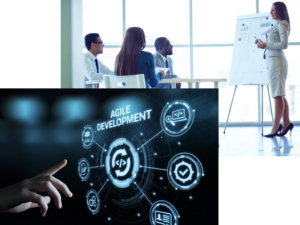 Carina opened our discussion stating that men are welcome since this is a group focused on maximizing diversity in the creation of better solutions. The group is also meant to provide a safe space for women to seek support and grow with others. Women in Agile provides that support through three programs:

3. Seed Local Communities: this provides support in the creation of local chapters and meet ups

The main concern of the group right now is promoting women in STEM careers especially since numbers have been dropping off the last four or five years.

The conversation switched to diversity with regards to implied white, male privilege versus being a woman. An example was provided of a woman researcher with a PhD leading a meeting where she was the only woman present and it was assumed she would take care of the notes as well as making sure appropriate refreshments were present. There is also the issue of women appearing “ladylike” when it comes to emotional expression, e.g., when a man is forceful he is considered to be a “leader,” while if a woman shows the same emotional expression she is at risk for being considered “bitchy.”

These implied biases can be quite damaging to an organization since they blind those doing the hiring to a pool of talent that can add to the organizations diversity which, again, can lead to better more effective problem-solving. From a risk perspective there is also the issue when failing to hire for diversity of creating a blind spot where major problems develop on projects and the team as well as senior management are caught unaware, much to the disappointment of the customer. Gender bias is one of many cognitive biases that knowingly or unknowingly contribute to failure or inability to achieve the maximum amount of success possible under the circumstances.

Carina referenced Ash Coleman, Head of Diversity and Inclusion at Credit Karma, when speaking with a group of interns. In a previously attended conference, Ms. Coleman spoke regarding the decrease in product performance when diversity is not taken into consideration. Examples were given of products that failed miserably, products that were created by all-white, male teams, e.g., facial recognition. Multiple, diverse frames of mind are needed when working on product creation based on market segmentation. This includes career, cultural, and life experience diversity in addition to gender diversity.

Jazz was used in the conversation as a metaphor for the power of diversity when working in an agile environment when addressing problems that have not been solved before. Jazz musicians bring their various frames of mind as well as the discipline they learned working with various chordal systems. The artist’s experiment with different frames of mind while they’re actually performing, challenging each other to “keep up” and work in an integrated way so that the customer (audience) has a pleasant experience.

Doug McCullough, the CIO for the city of Dublin, Ohio, was also mentioned because he believes if everyone in the room is in agreement then some of those individuals are probably redundant and, there’s potential for missing key components associated with solving the problem.

Also, there’s the need to be comfortable with discomfort when maximizing the diverse talent present on a team. Also, the need for self-doubt in order to leave room for team member’s thinking is critical when doing product development. This leads to the need to be vulnerable to be an effective leader, a trait not reinforced in our culture.

Rotating individuals between different teams in different areas of an organization is one way to promote diversity as well as integrate individuals more deeply into the organization. As an Agile Practice Lead Carina looks for diversity at the team level. She looks to see who’s Introverted and who’s Extroverted as well as timing and style differences; always looking to see how the diversity can be used as a constructive force. In the end, this means that we all benefit from each other and there is no need to have boundaries, e.g., women versus men. Unfortunately, cultural stereotypes as to men versus women still have a strong influence on a day-to-day basis both at the tactical and strategic level, e.g., who gets to speak and how during meetings.

Various techniques for conducting meetings and gaining information when working with a diverse group were discussed, e.g., using “parking lot” flipcharts as well as techniques from books such as “Back of the Napkin.” Ideally there would come a time where people treated others equally and there be no need for groups with names such as Women in Agile.

The conversation then shifted to the pluses and minuses associated with teams either being together for extended periods or members being swapped out at a frequent rate. This led to a lively discussion around the words habit, expectations, principles, complexity, chaos, and simplicity. The results fell into several categories:

1. Working together for extended periods allows team members to quickly pick up on body language and subtle cues which is a plus. On the downside, habits that tend to cause people to go blind could set in;

2. An agile approach is ideal in situations where the rules have either fallen apart or it is an exploratory situation where there frankly aren’t any rules. This is the nature of complex and chaotic situations;

3. Conversely, in simple situations where the rules function well there is no reason to confuse and overcomplicate by acting as if the situation is actually more an R&D endeavor;

4. The word “principal” was contrasted with the word “habit.” It was agreed that those who are principal-based should and do have habits which reflect their awareness of the situation and the appropriate application of principles. This is in contrast to a more negative use of the word “habit” where individuals are mindlessly going about doing their work without bothering to see if what they are doing is actually appropriate for the situation. Also, habits can shift over time based on the continual, flexible application of principles;

5. Essentially, it’s critical to avoid going on autopilot without reflecting when making decisions as to the best way to proceed;

6. The importance of being on guard with respect to expectations and working to avoid letting them cloud one’s vision;

7. The importance of focusing on commitments and areas of agreement to help avoid the team falling apart due to internal differences.

While there is some documentation, one of the key aspects of agility is the project living within the relationship between the team members. Consequently, having and appreciating diversity is critical if the customer is to be served appropriately. This lack of documentation can be taken to the extreme is expressed in Haydn Shaughnessy and Finn Goulding’s book, “12 Steps to Flow,” where the documentation is limited as much as possible to post it’s on the wall, Twitter, text messages, and phone calls.

The conversation returns to a discussion of simplicity and, specifically, the use of waterfall methodologies and when they are appropriate. Essentially, when a proven methodology has been established, e.g., say, laying a foundation for house, then there is no reason to use an agile approach. Stick to the methods that work. Agility in this case would cause confusion and over-complicate the situation. What this gets down to is the need to use the right tool at the right time that’s appropriate for the situation. Waterfall is good for some projects while agile approaches are good for others.

The important point here is to avoid viewing any particular methodology as the “religion” of the “true believer.” It’s that sense of religiosity which makes what was initially a very healthy approach into something that is counterproductive.

There is also the need, as Carina says, to pay attention to the fact that we live in the “real world.” This means that regulatory, financial, and risk-oriented stakeholders may demand compliance with a particular methodology that may run counter to using an agile approach. The key point that Carina wants to reinforce is reflected in the book “The Four Agreements,” by Don Miguel Ruiz. Her point being there’s actually a Fifth Agreement, be skeptical. This allows for considering various ways to view a situation in order to get the best solution, which brings us back to the value of diversity, which brings us back to Women in Agile. Have questions, wonder what the story is behind a situation, etc.

This leads to practicing cognitive dissonance which is the ability to carry multiple models of the situation simultaneously in one’s head and go back and forth between and/or choose combinations of the various models. Again, a diverse conversation is quite beneficial. It gets beyond cultural biases as reflected in sexist approaches.

The conversation then shifted to agility versus lean and the relationship between the two. Essentially, they can work well together where, say, in a manufacturing situation lean is appropriate but when an unanticipated problem surfaces a switch to agility could be the best way to resolve the issue and get back into steady production. At the extremes, agility relies on a Bayesian statistical approach, i.e., as new information is gathered the model or frame of mind one is using to solve the problem shifts accordingly. This is in contrast to a lien approach where one may be looking at “six Sigma” statistical certainty. How this relates to Women and Agile is this: if you want to have a disciplined, flexible, fluid team that can get to the heart of a matter and solve problems and create solutions then diversity is needed along with a correspondingly safe environment where the team members can be spontaneous and proactive…free of worry or retribution for being put down or being sidelined.

The Toyota-GM joint venture, NUMMI, is offered as an example of culture, discipline, teamwork and the need for safety and what happens if those factors are missing. TPS, Toyota Production System is referenced as a method that combines management philosophy, production methods, and societal influences to increase the level of quality and sustained success. This is grounded in allowing people working on the line to stop production when observing a safety or quality issue that is best resolved now. This is contrasted with the punishing aspect GM held at the time towards workers who would stop the line.

The point of all this is it is critical to allow the workers to perform in an agile manner even when it cuts against the expectations associated with formal processes. Again, we come back to the importance of diversity.

Finally, we all flip to an agile frame of mind routinely even when working with standardized methods, we may just not call it such. So just stop, look, and think about what the best tool for the situation is. Whether or not that proposed solution comes from a woman is essentially irrelevant. The important thing is deciding whether or not senior management, the team, and associated stakeholders will unite and embrace the discomfort they need to walk through in order to identify root causes and succeed. Dealing with this challenge is something Gary runs into in his consulting and coaching practice.

You can reach Gary Monti on:

If you are working in Agility and dealing with complex situations, you can download CMC’s free e-book MINDSET – 5 SIMPLE WAYS TO LOOK AT COMPLEX PROBLEMS and learn how to find a simple vantage point from which you can resolve challenges.